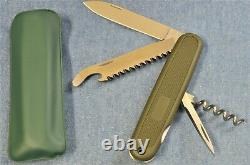 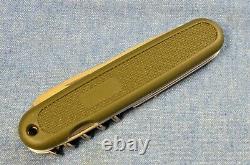 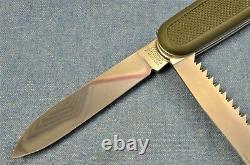 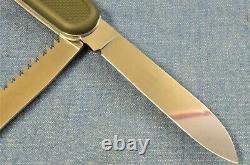 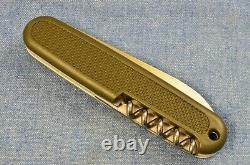 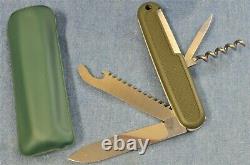 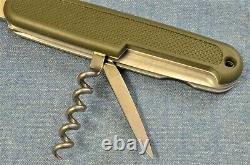 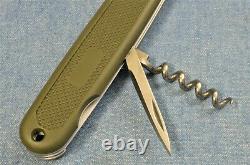 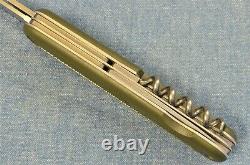 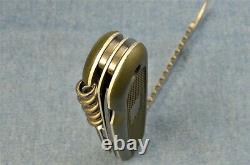 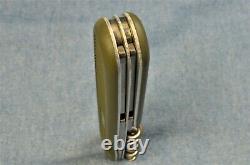 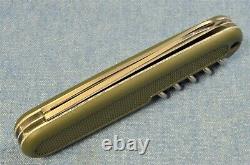 The Trooper has the same Olive Drab (OD) coloured scales, but without the German Army Eagle emblem. There are four different knives based around the original GAK, each model has the same compliment of tools: Consisting of the main blade, wood saw (with integrated can/bottle opener and screwdriver), corkscrew, and a reamer/awl, but with different scale options. The GAK was discontinued in 2003 in favour of the new 111mm one-handed opening GAK. Some models from the 108mm line continued for some years after that. Cosmetics: Brand New Old Stock NOS knife, in the original plastic sleeve / sheath. If you were wondering: these early Troopers, most times, were not offered in a box -but the plastic sleeve only- and did NOT come with the wood saw cover. First purchaser gets the one w/o split sleeve. Second purchaser gets the "split" one. Mechanics: Brand New Working Order.

Please ask locally because your package might be sitting there. Ask for a combined S&H quote before paying , or wait for us to send the invoice. We will promptly communicate with you and answer any questions or concerns you may have. We're not a Retail Store, but a Vintage-Nikons Collectors. The item "1979-80 VTG 108mm Victorinox OLIVE GREEN SAFARI TROPPER Swiss Army Knife NEW NOS" is in sale since Sunday, May 16, 2021. This item is in the category "Collectibles\Knives, Swords & Blades\Collectible Folding Knives\Modern Folding Knives\Factory Manufactured".n" and is located in Hidalgo, Texas. This item can be shipped worldwide.