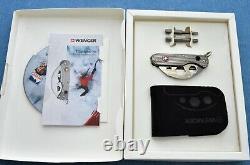 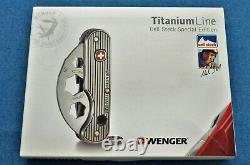 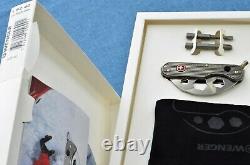 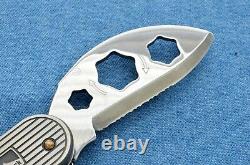 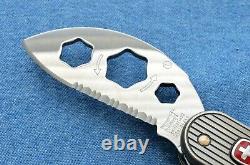 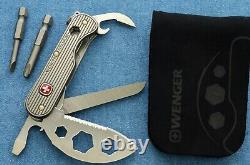 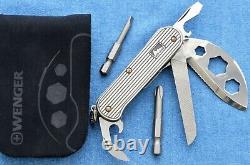 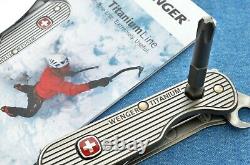 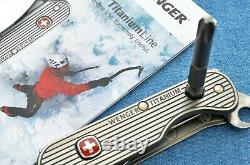 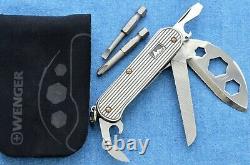 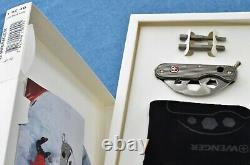 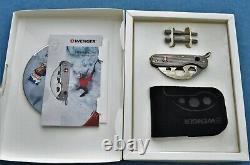 2011, RARE Wenger Titanium UELI STECK / Series 3 Swiss Army Knife - SAK for outdoors, mountaineering use. The first Swiss Army Knives which include TITANIUM tools / components. Rare then, rarer now and -for sure, these Titanium Series Wengers shall be very much sought after knives in the future to come.

The Wenger Titanium Ueli Steck Special Edition is an three-layer Swiss Army Knife that features several tools integrated into a liner-locking knife-blade and wrench combo-tool. This model also features a standard 1/4 (14mm) bit-driver build-in to the scales, similar to the design used on some larger 130mm models. The handles (or scales) are made from a titanium metal alloy. The liner-lock on this knife is released by pressing the red Wenger logo button, or by pressing the protruding tab on the actual liner.

Designed to meet the needs of mountain climbers, this model is a member of the Titanium Line. Designed in partnership with well known Swiss mountaineer Ueli Steck. An instruction and information leaflet and a DVD was provided with this model. First introduced in 2011 as part of the.

Along with the Titanium 1 and 2 models. The titanium handles or scales offer increased strength, without a significant increase in weight. The models in the Titanium Line are were the first regular production Swiss Army Knives to use titanium. Included a flexible all weather pouch and DVD. The pouch features a Velcro closure; holds the knife, and up to 3 bits.

This is the first Wenger 85mm model to contain a stainless-steel cut file/metal saw. Designed for extreme conditions and adaptable with different screwdriver-bits for various activities. The liner lock for the blade/wrench combo tool can be released with a press on the release button (red Wenger logo), or by pressing on the protruding tab on the actual liner. This model is a member of the. / [Wenger Titanium Series], first introduced in 2011. Cosmetics: Brand New Old Stock NOS, complete package including every single paper, CD and bit, just as furnished from the factory, as shown. The carton box shows wear.

50mm hex bit for Flat Head Screws (0.6x4.5mm). In January 2011 the Wenger company announced the Titanium Line, consisting of three 85mm models, in a unique brand new design. The Titanium Line evolved from a partnership between Wenger and well-known Swiss mountaineer Ueli Steck, to design a tool for his style of mountaineering, and continued Wenger's company direction of providing tools for the outdoor enthusiast. The handles of the knives are made from a titanium metal alloy which offers increased strength, without a significant increase in weight. All members of the series feature a very unusual.

Which incorporates a knife-blade, three wrenches and a screwdriver. The blade is equipped with a liner lock, which is released by pressing on the release button (red Wenger logo), or by pressing the protruding tab on the actual liner. There is also a 1/4 (14mm).

/wrench slot (port) in the front side scale for standard bits. The wrenches and screwdrivers are for adjusting mountaineering equipment (eg ice-axe). With a lightweight (24.5g) all-weather belt-pouch, that held the knife and up to three screwdriver bits. The basic Titanium 1 model included the combo tool, bit-driver {two bits were supplied with the knife: Flat head (0.6mm x 4.5mm, 50mm) and Philips head #3 bit (50mm)} and a. The other models added the tools indicated below. Kind eBayers from over 60 COUNTRIES/FIVE CONTINENTS have bought our Nikon items! Please ask locally because your package might be sitting there. Ask for a combined S&H quote before paying , or wait for us to send the invoice. We will promptly communicate with you and answer any questions or concerns you may have. We're not a Retail Store, but a Vintage-Nikons Collectors. 2011 RARE UELI STECK Wenger Titanium 3 Series Swiss Army Knife New in Box NOS" is in sale since Friday, July 9, 2021. This item is in the category "Collectibles\Knives, Swords & Blades\Collectible Folding Knives\Modern Folding Knives\Factory Manufactured".n" and is located in Hidalgo, Texas. This item can be shipped worldwide.