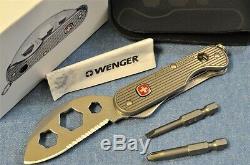 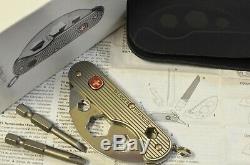 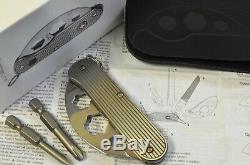 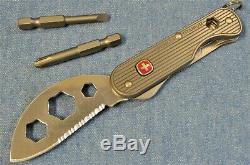 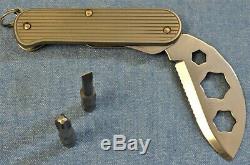 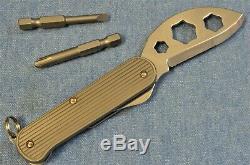 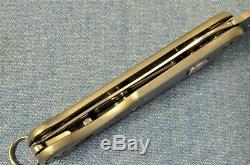 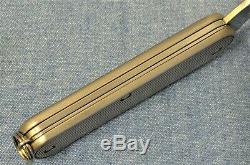 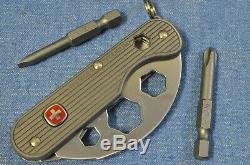 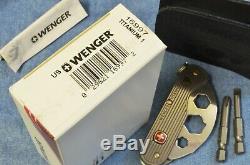 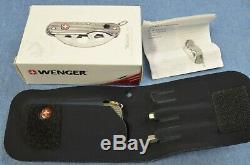 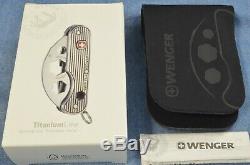 WE DO BLOCK NON-PAYING PURCHASERS, FOREVER. 2011, RARE Wenger Titanium Series 1 Swiss Army Knife - SAK for outdoors, mountaineering use. The Wenger Titanium 1 is a single layer knife that features several tools integrated into a new locking knife-blade and wrench combo tool, and a standard 1/4 (14mm) bit-driver. The handles (or scales) are made from a Titanium metal alloy for increased strength without a significant increase in weight. Designed for extreme conditions and adaptable with different screwdriver-bits for various activities.

The liner lock for the blade/wrench combo tool can be released with a press on the release button (red Wenger logo), or by pressing on the protruding tab on the actual liner. This model is a member of the Titanium Line.

In January 2011 the Wenger company announced the Titanium Line, consisting of three 85mm models, in a unique brand new design. The Titanium Line evolved from a partnership between Wenger and well-known Swiss mountaineer Ueli Steck, to design a tool for his style of mountaineering, and continued Wenger's company direction of providing tools for the outdoor enthusiast.

The handles of the knives are made from a titanium metal alloy which offers increased strength, without a significant increase in weight. All members of the series feature a very unusual. Which incorporates a knife-blade, three wrenches and a screwdriver. The blade is equipped with a liner lock, which is released by pressing on the release button (red Wenger logo), or by pressing the protruding tab on the actual liner.

There is also a 1/4 (14mm). /wrench slot (port) in the front side scale for standard bits. The wrenches and screwdrivers are for adjusting mountaineering equipment (eg ice-axe). With a lightweight (24.5g) all-weather belt-pouch, that held the knife and up to three screwdriver bits. The basic Titanium 1 model included the combo tool, bit-driver {two bits were supplied with the knife: Flat head (0.6mm x 4.5mm, 50mm) and Philips head #3 bit (50mm)} and a.

We will promptly communicate with you and answer any questions or concerns you may have. We're not a Retail Store, but a Vintage-Nikons Collectors.