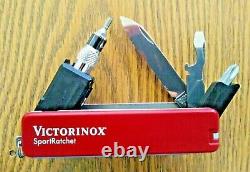 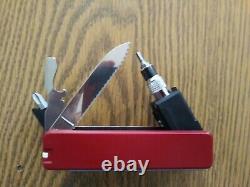 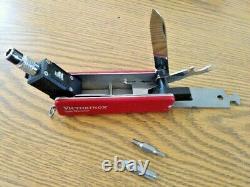 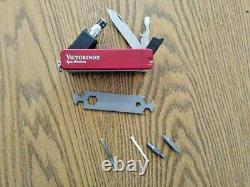 This is a very unusual discontinued Victorinox product. This ratchet driver equipped multi-tool has some of the features of the well-known Victorinox Swiss Army Knives, but is a completely different design unlike any other SAK made by the company. Its main feature is a ratcheting socket driver with removable hex bits. Two double-sided hex bits were included with the product and are included with this one. One bit has two different sizes of phillips screw drivers, and the other has two different sizes of hex bits--3mm and 4mm. The SportRatchet also features a 3-inch serrated drop point blade (unusual for Victorinox knives, which are most often not serrated), and longer-than-standard combination bottle-opener/slot screw driver/wire stripper tool. A folding holder for the spare hex bit is included, as well as a removable toothpick and set of tweezers on the outer scales, and a keyring. Rounding out the toolset is a removable flat wrench 11mm long (4.3 inches), with six different sizes of wrench holes: 8mm, 10mm, 12mm, 1/4", 3/8", and 7/16.

Only a very limited number of these SportRatchet multitools were made, around the year 2000, give or take. It was an unusual venture for Victorinox in many ways. For one thing, while the knife blade, opener tool, and several other features were made in Switzerland, other components, such as the ratchet system and the removable bits, were made in China, and the entire tool was assembled in the United States. Strangely, unlike practically all their other products, the Victorinox cross and shield logo was not printed on the tool.

However, neither the box nor the pouch are included in this sale, as they were evidently lost. As far as I can tell, all the actual parts, components, features, and tools are here and undamaged. The only very slight sign of wear I can find is on the phillips bit, which shows signs of having been used slightly, but not damaged.

The ratchet system works correctly in all settings. This item is considered more of a collector's item for its rarity, rather than a useful tool.

While it could be used, collectors will recognize its value more for display. When introduced, the model was unpopular. One particular reason could be a lack of good fit and finish in the ratchet system.

There is some play in the ratchet components (including that the bit does not fit tightly in the socket, but can slide out easily). Due to its lack of initial sales success, it has now become a sought-after collector's item. A portion of the proceeds from this item will go to The Academy of Arts, a Christian youth ministry my children are involved with. The remainder goes to support our working-class American family.

This item can be shipped to United States, all countries in Europe, Canada, Australia.