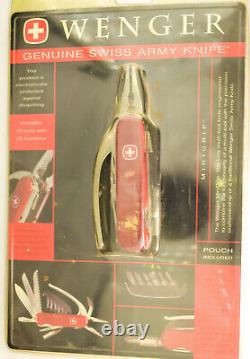 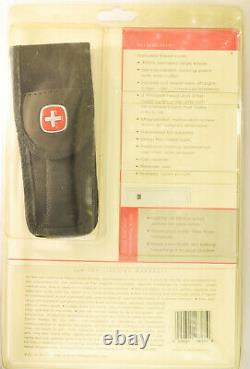 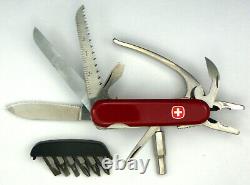 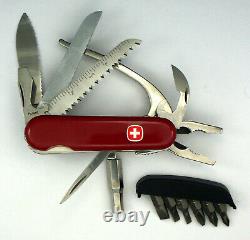 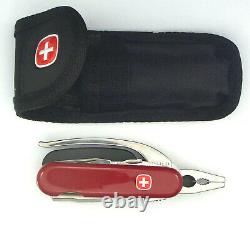 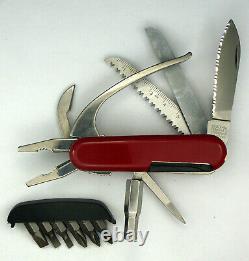 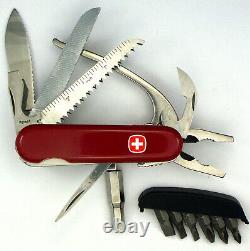 MODEL DESCRIPTION: The Wenger MiniGrip is Wenger's response to Leatherman's multi-tools. It has large pliers built into a body that is similar to existing Swiss Army knives. The extra space behind the pliers handle is filled with standard 85mm tools, plus a fold-out tray of bits, similar to the Victorinox CyberTool.

You can mount the bits on a rear-mounted bit holder, or detach the holder and plug it into a receptacle on the end. This model was also called the PocketGrip. There are several versions of the PocketGrip: some have needle-nose pliers, and some have stub-nose pliers.

Some have a plain blade, and some have a 100% serrated blade. Wenger also produced a WengerGrip model with large pliers in a very different body. ITEM NOTE: This knife is in an unopened plastic package. It has a serrated blade, and the stubbier version of the pliers. It also includes a black nylon pouch. Photos with tools open are from a different knife. The plastic is yellowed slightly with age.

Bottle Opener with Screwdriver Tip. Bit Driver with Bits in Tray. They are much more expensive. This item is in the category "Collectibles\Knives, Swords & Blades\Collectible Folding Knives\Modern Folding Knives\Factory Manufactured".

The seller is "smartknives" and is located in this country: US. This item can be shipped worldwide.